Michele Herman writes poetry, fiction, and essays, and translates French songs. Recent publications (Brooklyn Rail, Literary Mama, Diagram, Society of Classical Poets) and awards indicate she may be on to something. Her first chapbook of poetry, Victory Boulevard, was just published by Finishing Line Press and one of her short stories appears in the anthology The Writers Studio at 30 (Epiphany Editions, 2017). She has won or placed in contests in all four of her chosen genres: she won the 2015 and 2017 Willis Barnstone Translation Prize and the 2018 New York Press Association Best Column award, was semifinalist for the 2016 Raymond Carver prize and finalist in the 2016 Bass River Press Poetry Competition. She’s also a devoted and enthusiastic teacher in The Writers Studio’s online program, where she teaches beginning fiction and poetry and a new memoir class, and works privately with a dozen talented writers on whatever they need, from a kick in the pants to help preparing a manuscript for publication. On the side she does a little spoken word in theaters and at cabarets around New York City, sometimes paired with her singing husband. They have two grown sons and live in Greenwich Village. 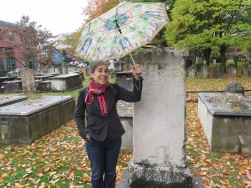